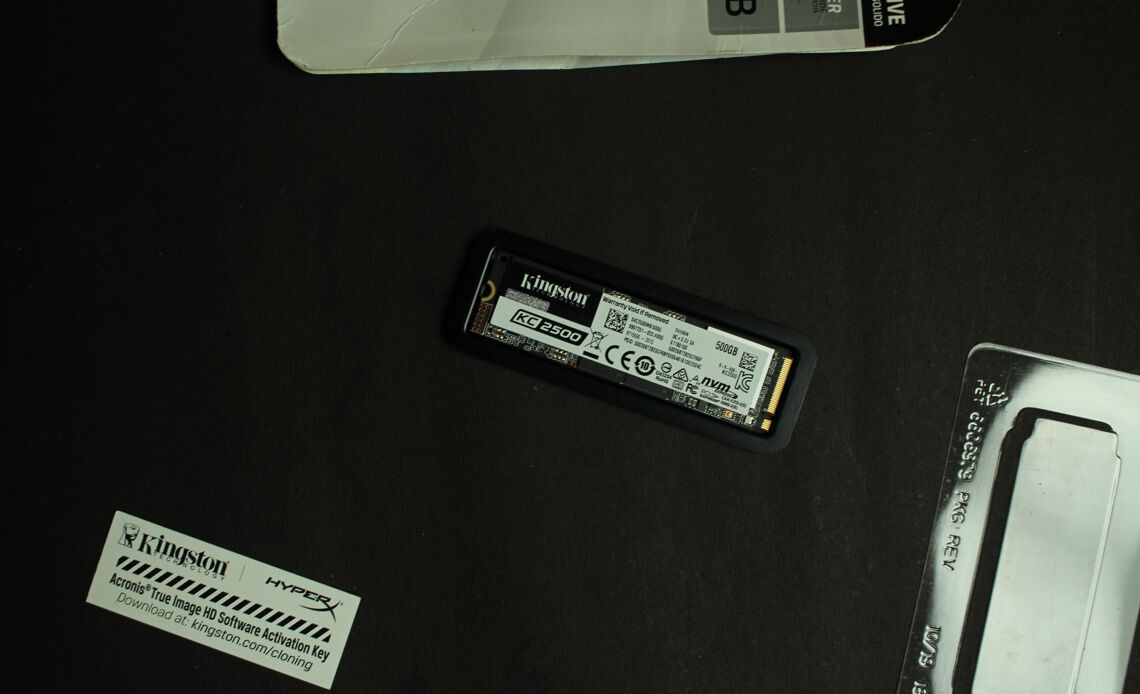 The Kingston KC2000 is equipped with Silicon Motion’s SMI 2262EN high-performance gen 3 controller which is pretty well known to hit some insane copy and write speeds. Kingston claims speeds up to 3,500 MB/s read and 2900 MB/s write which in turn converts to 375,000 IOPS read and 300,000 IOPS write which is a small bump from its predecessor.

This drive is also packed with some basic security and backup features where the drive itself is a self-encrypting drive that supports an end to end data protection via the XTS-AES 256 bit hardware-based encryption and also supports independent security software vendors that support the TCG Opal 2.0 Security solution management solution like McAfee, Symantec, WinMagic and more.

Well, enough talking let’s dive into the review. For our review, we have the Kingston KC2500 480GB model.

Installation is pretty straight forward. In my case, a raiser screw was required to install the Kingston KC2500 on my motherboard (MSI B450 Tomahawk max) which was included with the motherboard. So, if you have one consider yourself lucky and get started with the installation.

Once install, you have to create a new drive with the NVMe drive which you just installed. You can use this guide on Origins PC that will save you some time to add your new drive to your computer.

There’s nothing much you can talk about the drive except the insane loading speeds you can get on your game loading speeds and some copy speeds that you can not have imagined. For example, I moved my massive 250 GB of Call of Duty Warzone from my SSD to an NVMe drive which barely took 10 minutes with over 350 MB/s copy rate. That was really satisfying.

Apart from that, I tried to game and record the gameplay to the same drive. Meaning, the game was loaded from the Kingston KC2500 and was recorded back to the same drive as .mkv format without any hiccup.

The exact model I use – Kingston KC2500 NVMe PCIe SSD -SKC2500M8/500G M.2 2280 Internal – PCI Express NVMe (PCI Express NVMe 3.0 x4) costs Rs. 9.649 on Amazon.in as on 14/09/2020. The price-to-performance ratio is definitely good and would definitely recommended to someone who is looking to get some good speeds and insane loading speeds for your daily work, productivity and gaming.