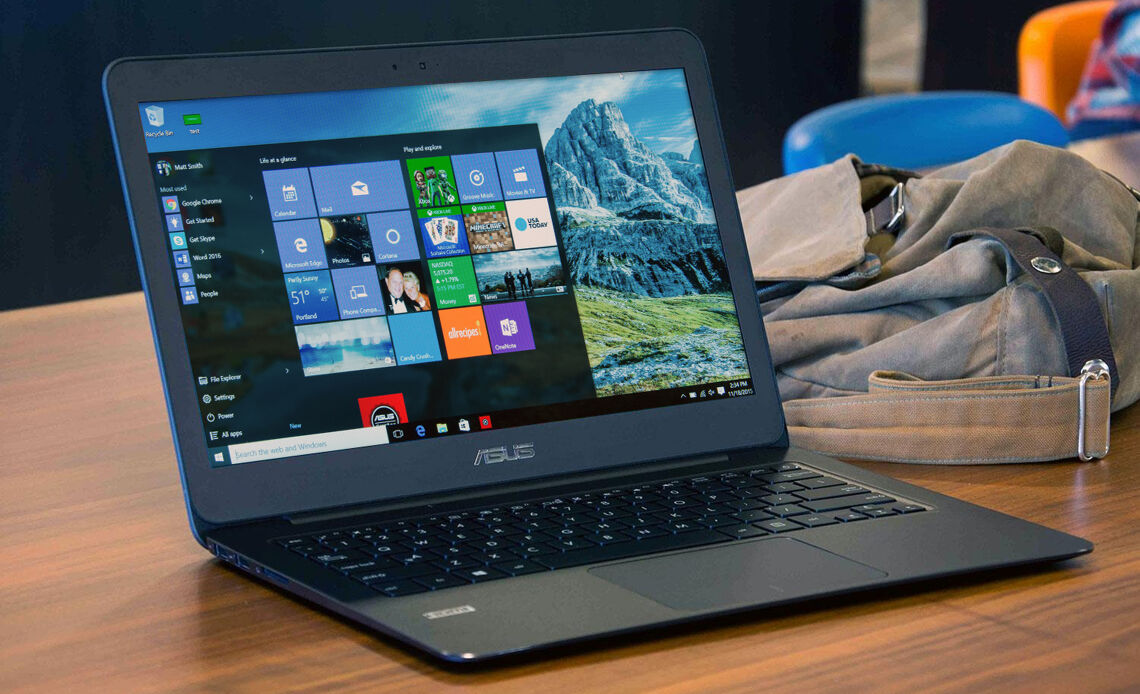 Apple has had a hold over the thin and light laptop market ever since it came out with its Air lineup. With the launch of the 2015 Macbook, Apple has opened a new market where ultra thin and light machines are the name of the game and as usual, a number of companies followed suit and started making their own Ultrathin laptops. The ASUS UX-305 is one such laptop but it packs quite a punch.

Contents hide
1 Design:
2 Specs and Performance:
3 General Hardware use:
4 Why the ASUS UX-305

To start things off, let’s talk design. The ASUS UX-305 has a thin and light profile. It weighs in at just 1.2 kg and is really thin at 1.23 cm(or 12.6 mm). To the top it has a brushed aluminium exterior with the ASUS logo etched in the middle. The underside is made of plastic with four rubber feet placed in the corners and small vents for cooling. opening the laptop raises the underside, this is so that air can flow under the laptop, keeping the thermals under check. We have a 13.3-inch display at the front with the ASUS logo under it. The Keyboard and trackpad reside in their usual places. The chicklet keyboard present here offers 1.5mm of travel and the Trackpad is made of glass and offers multi-touch gestures. To the right of the laptop, we have the charging port, microHDMI port, a USB 3.0 port, headphone jack and small prick LED’s that are indicators for battery and power. To the right, we have 2 USB 3.0 ports and an SD-Card reader. The UX-305 has hit it right with the design and does not sacrifice on functionality to just look good. It’s built really well and is beautiful to look at. The screen hinge is solid and can be opened with one hand, which is great considering the size of the machine. The only cons for me are the huge bezels around the screen and the lack of backlighting in the keyboard. The laptop comes in three colors Gold, Black and white and I’m using the black variant.

The ASUS UX-305 comes in a number of configurations. The one I’m using is the base variant with the Core-M Broadwell chip with 4GB of ram and 256GB of M.2 Solid state storage. This configuration isn’t the greatest but is definitely sufficient for general tasks and day to day use. The performance is what we expected from a laptop built primarily for media consumption and work on the go and it doesn’t fall short in any of those scenarios. Gaming isn’t possible but it can run light titles like Minecraft and league of legends with the graphic settings toned down. For those who want more out of this machine, ASUS provides a couple of variants with the Core i5 and i7 chips in place with ram configurations up to 8GB and storage up to 512Gb. I really liked using this laptop for general video watching, editing documents on the go and then just threw it in my backpack. The laptops 44 Wh battery is nothing short of great. It lasts me two full work days or around 8-9 hours of use. It fully charges in around 2.5 hours(Kinda unsure because I mostly charge it overnight). Standby time was brilliant too. It comes out of the box with Windows 10 Home edition. There is not much bloatware and even the one’s present can be removed easily.

The keyboard is comfortable to use but lacks backlighting and a number pad which I miss. The lack of a number pad is acceptable and was expected considering the size of the laptop. The keys are spaced well and typing was really comfortable. The trackpad wasn’t the greatest out there but does the job. It does miss a touch or click here and there but nothing too annoying such that it hinders day to day use. The 13.3-inch display is a 1080p panel and is a nice one and has decent viewing angles and brightness. It’s a good panel to look at, but nothing too extraordinary. The 720p webcam was meh, it’ll get the job done for video calls. The speakers in this laptop sound okay. They are placed under the laptop, so what you play sounds kinda distant. They don’t get too loud and so I would recommend getting a pair of headphones or an external speaker.

So you might start questioning what makes it unique? all of what I said above sounds similar to a lot of laptops around in the market. Well, to start the ASUS UX-305 is a great package as a whole. The form factor and decent screen, good keyboard coupled with that awesome battery life is what I want from a thin and light machine. Let’s be honest, no one is expecting discrete graphics in this form factor yet. The ASUS UX-305 is not only thinner than the 2015 Macbook but doesn’t cut down on ports too. It also offers better performance than its similarly specced Apple competitor and offers standard Core I line of processors in the same form factor. All this it does at half the price of the 2015 Macbook. Actually, you are looking at less than half the price for the base variant that I hold and it still runs the same Core-M processor as its Apple counterpart. That price alone wipes it’s already small drawbacks away. This machine gets away with providing a solid experience and ASUS has done a great job with this one. For anyone looking to get a thin and light Ultrabook for basic computing, well you don’t have to look far, The ASUS UX-305 offers just that.